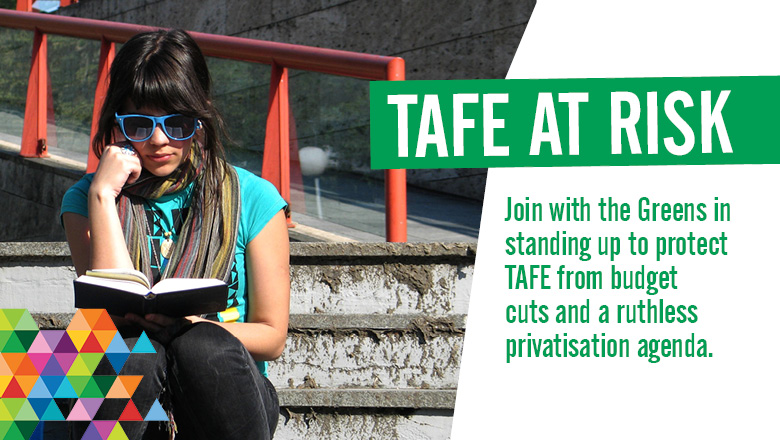 THE full and partial sale of Hunter TAFE campuses will raise more than $6million for the state government but potentially rob the region of a prosperous economic future, according to Greens MP John Kaye.

‘‘There’s no question theHunter has taken a fairly savage blow,’’ Dr Kaye said.‘‘For more than a century the state has provided young people, working class people and people with disadvantaged  backgrounds with a ladder to climb into employment and to get skills.‘‘The Baird government is now busy breaking that ladder.’

Mr Kaye said the leaked four-page cabinet document that named 27 TAFE sites across the state to be sold for a total of $62.97million earmarked four Hunter campuses to be fully or partially sold for $6.47million.

Dr Kaye said the proposed closures would reduce the access of a whole generation of Hunter residents to education and training, particularly if they did not drive or have access to public transport to travel to another campus.

He said many of the students who attended TAFE needed the support of a face to face teacher and physical classroom and would struggle with courses being moved online.

‘‘It’s fine for people who have experience in learning and who have language, literacy and numeracy skills, but very bad for people who struggle with the use of computers and who will be isolated without access to teachers,’’ he said.

‘‘Many young people will have the chance of employment, the chance of building a life for themselves taken away because the Baird government wants to cut its investment in TAFE.

‘‘The Hunter community is being robbed of its economic future and pathway to employment and quality of life in return for more than $6million being ripped out by the government.’’

Dr Kaye said the Hunter faced employment challenges and needed tools to continue building the skills of its workforce. ‘‘Investment in public education produces a big return to the community and to government, and not just economically, but socially, too,’’ he said.

A PROPOSAL to replace TAFE teachers with trainers will be discussed when the NSW Teachers Federation meets with the state government on Thursday September 17 to negotiate a new enterprise agreement.

The state government has given teachers a document that reads ‘‘To continue to deliver quality training, TAFE NSW needs a modern educational workforce model that is responsive to the needs of our learners, who want training delivered anytime and anywhere, in a way that works for them.’’

It proposes adding a new role of trainer to the agreement, to ‘‘help us win new business’’.

NSW Teachers Federation President Maurie Mulheron said his members were concerned teachers would be replaced over time with unqualified trainers, who would be paid at what he estimated would be half the teacher rate.

‘‘Over time teachers will move to a smaller role at TAFE and be more supervisors working in the background, developing a curriculum to be delivered by an unqualified person,’’ he said.

‘‘The stability and assurance that comes with knowing your teacher is an expert in their field and on the cutting edge will be gone.

‘‘People graduating won’t be able to have the same confidence [in their qualifications] that TAFE was known for.’’

The state government has proposed a 2.5 per cent per annum pay increase each year for two years.

First published in The Newcastle Herald on 15 September 2015.