The Canada Bay Greens has responded to the Government’s revised plan for Rhodes with a submission.

Here is the submission summary:

This submission was in response to the NSW Government’s call for submissions to their revised plan for Rhodes. For details of that plan, go to: https://www.planning.nsw.gov.au/Plans-for-your-area/Priority-Growth-Areas-and-Precincts/Rhodes

The NSW government plan for Rhodes offers some interesting and useful features for the community. However, contrary to the government’s mantra of building infrastructure, the plan falls dramatically short in the areas of transport, schools, hospital services and sporting facilities. The enormous population proposed for Rhodes cannot be supported. Much more space is required for other services.

Letter to the editor:

Here is the text of Charles Jago’s letter to the editor of the Inner West Courier, published Tuesday 5th February 2019:

Commenting on the revised NSW Government plan for Rhodes released in December, local member John Sidoti was quoted in the Courier that “the Rhodes East precinct will get infrastructure before apartments go in.”

However, the Government proposes a three-quarters increase in dwellings in Rhodes without any substantial improvement in transport infrastructure in the short to medium term. Their plan does not include a strategy to ensure the trains and roads will cope with such a massive increase in the number of people travelling on Concord Road and through Rhodes Station.

During peak hour the trains now run at full capacity, with Concord Road frequently a parking lot. Rhodes is already a transport choke-point with over 12,000 residents today, plus many Wentworth Point residents who come to Rhodes Station across the Bennelong Bridge. The government’s transport initiatives – including Rhodes station upgrades and the proposed ferry wharf – remain inadequate for current needs, let alone a population increase of three-quarters.

The Government’s proposed light rail from Parramatta to Wentworth Point and the Sydney West Metro would still leave Rhodes under pressure; these won’t be completed until 2025 at the earliest. In fact, these projects remain uncertain, with the business cases for both of them still to be released.

The community wants transport solutions. The government’s plan will give them chaos. Let’s have the infrastructure first, then consider growth.

At a meeting of the Canada Bay Council on Tuesday, I was appointed as Deputy Mayor for the next 12 months through a resolution of Council. My thanks to my fellow councillors for their trust in me with this appointment.

In the year since taking on the councillor role, I have moved 4 motions (all passed by Council): 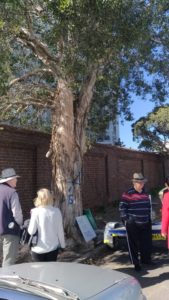 Attended Council meeting 12 June, where councillors agreed to update the Local Environmental Plan (the key local document for planning matters) to give Council more control in dealing with new state government rules, of which the latest is their low rise medium density policy.

Chaired Council’s environment advisory committee meeting on 28 June. The Committee completed setup of its internal teams, which will take on projects in the areas of: education; litter and waste; and biodiversity. I also attended the first meeting of Education team held in late June, prior to Environment Committee meeting. In its main meeting a key presentation and discussion looked at Council’s carbon emissions targets.

Attended a committee meeting of the Parramatta River Catchment Group on 7 June. It has now completed its master plan for the River, covering multiple projects. The plan will be launched in October as part of Riverfest (9 day festival across multiple locations and councils), and coinciding with the International River Symposium in Darling Harbour.

NSW Transport Minister, Andrew Constance has told media of the government’s vision for a completely privatised public transport network. Mr. Constance told AFR on Monday that “in 10 to 15 years’ time, government will not be in the provision of transport services”.

Dr Faruqi said: “There is no doubt that advances in technology offer many opportunities to improve public transport but for the government to use this as an excuse to wash their hands of providing any public transport is preposterous.

“It is making more and more sense why the NSW Government is refusing to build new extensions to the public transport network and is spending billions on gifting the existing network over to the private sector.

“Because this government is incapable of delivering well-planned integrated public transport infrastructure on budget they just want to abrogate the responsibility altogether, rather than face up to the fact and improve.

“It is a responsibility of the government to guarantee the basic provision of public transport to people, and that includes those living in the most deprived and disadvantaged areas. Once you hand it over to private contractors, there is no guarantee that’ll happen and people who need it most will be left behind.

“Affordable, reliable and accessible public transport is an essential service. Once you hand it over to private sector there is no guarantee that commuters’ needs will be met. Transport will become a rat race for profit,” she concluded. 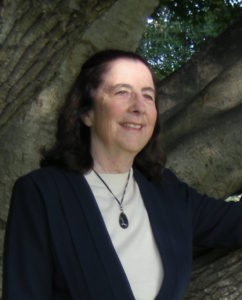 “The plan is yet another gift for developers in the inner west, with a miserable commitment to affordable housing, no new green open space and absolutely no commitment to any additional public transport.”

“Without a commitment to light rail on Parramatta Road, or green open spaces for our kids to play, the government is simply proposing more crowded residential towers with poor transport connections.”

“The government has proposed a pathetic affordable housing commitment which absolutely fails to address the enormous need for affordable properties in Sydney.”

“The onslaught of development into the heritage suburb of Haberfield continues, with large-scale development proposed for Parramatta Road that wasn’t present in previous plans.”

“The plan also increases the areas under threat by at least 50% in the Taverners Hill precinct, imposing large scale developments of up to 8 storeys in residential areas.”

“This plan is nothing more than a green light for a developer invasion of suburbs adjoining Parramatta Road, from Granville to Camperdown.”

“This takes place at a time when local residents have even less say in future developments, as their councils have been sacked.”

Greens NSW achieved a huge boost in Local Government representation with three Mayors and 24 councillors elected from the 29 districts that were contested in the September 2016 elections.

Greens Local Government spokesperson David Shoebridge congratulated the candidates and local groups that worked so tirelessly so soon after the Federal election.

Only half the councils in NSW were contested in the September 10 election, with others deferred to 2017 pending forced amalgamations.  No election was held in the Canada Bay Council area pending a decision by the Land & Environment Court in relation to an appeal lodged by the Canada Bay, Burwood and Strathfield councils against the State government decision to amalgamate the three councils.

The Greens went into the elections with 16 incumbents but Greens representation increased to 27 councillors.

“It’s clear the Greens NSW has had tremendous success in these elections,” Mr Shoebridge said.

Mayor of Byron Bay, Simon Richardson was rewarded for his dedication to the local community with an almost 12% swing and he will be joined by three other Greens on council, giving the party 4 out of 10 votes.

Amanda said the results reflect community support for our core values. “As Greens we stood side by side with residents and environmentalists to protect our beautiful coast, our homes and the environment from the pressures of overdevelopment. This vote reflects our longstanding commitment to the local community.”

The Greens also broke through for the first time in a number of councils. Dr Amanda Cohn and the Albury Greens backed up their strong effort at the federal election and Amanda was elected as the first Green to Albury Council.

We had narrow misses in Kyogle and Ballina (both less than 80 votes) and Saan Ecker missed out by just 13 votes in Yass Valley.

Mr Shoebridge was buoyed by the growth of our vote in Western Sydney, where we safely retained a councillor on Hawkesbury Council and gained councillors in Campbelltown and the Blue Mountains.

In the City of Sydney, Mr Shoebridge said the Greens were squeezed between Clover Moore and the gerrymandered business vote. “We congratulate Clover Moore on retaining the Mayoralty and staring down the Baird Government’s crooked electoral system.

“Across the state the Greens have been standing up for local government in the face of the Baird government’s attacks and local residents respect our consistent voice for grassroots democracy.” 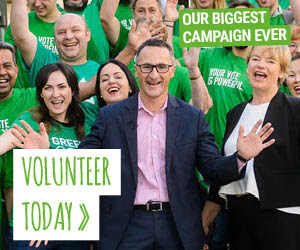 You can help to make this a Greener world! Volunteer now. 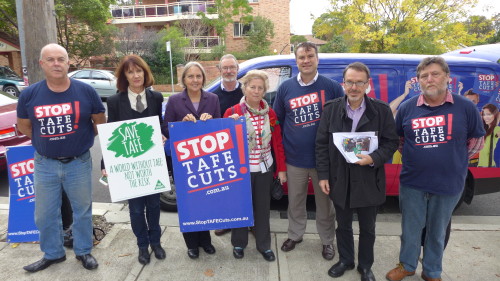